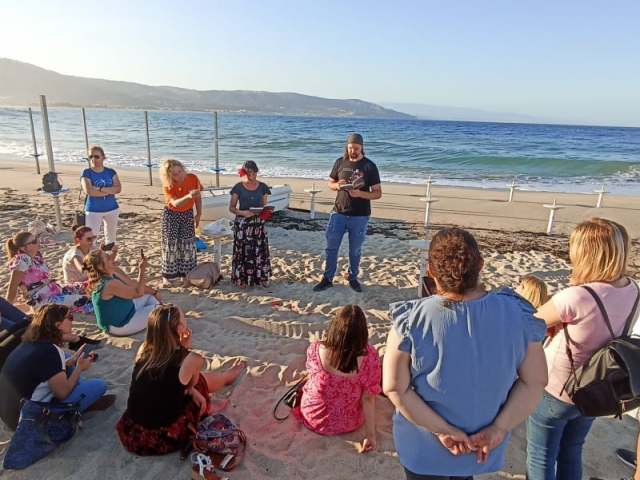 There is a very beautiful term that is used to describe the expressive association between words that belong to different sensory realms. This term is “synesthesia,” and it includes everything that happened last Thursday, May 19, 2022, in Soverato (CZ), at the first of 5 literary meetings planned as part of the Erasmus+ reading awareness project, “EU-Read&Art.”

The participants, teacher-trainers from different European countries, tried their hand at a sensory experience of collective reading and storytelling centered on the 5 senses, favoring that of touch. A sublime game, indeed, a “cadavre exquis”, would have said the Surrealist writers, who first experimented with the technique of collective composition dictated by the free association among different texts, images and narrative voices.

In this case, the would-be storytellers drew inspiration from a series of multi-sensory elements, combining the suggestion of places, namely the seascapes of the city of Soverato, to fishing with their eyes closed for certain objects contained in special “mystery boxes,” to be described by touch, to reading quotes from the great classics of European literature.

Thus, like the famous “Proustian madeleine”, the typical products of the Calabrian Ionian coast, from olive trees to lemons, from clementines to sage, passing through some objects of Mediterranean folk, offered the storytellers the right incipit to develop their stories, concluding everything in an exciting moment of reading and discussion on the beach.

After all, tying the reading experience to sensory perception and, as we said, to synaesthetic stimulation, is a road successfully beaten by flourishing authors in history: from the poet Rimbaud to our beloved Italo Calvino, who in his posthumously published and unfinished work, Under the Jaguar Sun, dedicates the short stories entitled The Five Senses to the subject. Nothing could be more topical, when referred to us contemporary digital readers, than his speech at a New York conference (translated and appearing in Italian in International Letter magazine, 1983), in which Calvino declares:

“A book I am writing is about the five senses, to show that contemporary man has lost the use of them. My problem in writing this book is that my sense of smell is not developed, I lack auditory attention, I am not a gourmet, my tactile sensitivity is approximate, and I am nearsighted. For each of the senses I have to make an effort to master a range of sensations and nuances. I don’t know if I will succeed, but in this case as in the others my purpose is not so much to make a book as to change myself, a purpose that I think should be that of every human endeavor”.

Well, the newly inaugurated workshop aims at the same “human endeavor” by stimulating a new approach to the written text and its representation in different creative forms, including videomaking, through which some booktrailers of suggested readings will be produced.